FAQ - Are You on the Verge of Making These Annual HOA Meeting Mistakes?

December 7, 2012 – In this week’s tip, we give you a jump on annual meeting planning by revealing two mistakes boards make all too often.

1. Failing to set up a pre–meeting timeline. “The number one thing I think boards make mistakes with is planning,” says Kristen L. Rosenbeck, a partner at the Mulcahy Law Firm PC in Phoenix, who advises many community associations. “They need to be setting up their timeline. Clients will say, ‘The meeting is on this date, and we were supposed to have set up a nominating committee.’ But they just threw themselves into the meeting without planning and looking at their governing documents.

“I recommend to my clients that they plan backward.” says Rosenbeck. “Go through your bylaws and write down all the things need to be done before the meeting. If you’re supposed to create a nominating committee 90 days out before the meeting and provide notice 60 days prior to the meeting, set those dates in your calendar so you’re hitting all those requirements. If you’re not doing that planning, you’re not going to hit the correct dates. That’s a problem especially if the bylaws say things have to happen on specific dates. If the governing documents don’t give flexibility and say your meeting has to be the second Tuesday of December, you’re stuck with that meeting date.”

2. Failing to check your state’s meeting requirements.“Many states have regulatory requirements as far as notice for the meeting, ” says Duane McPherson, the Carrollton, Texas—based division president at RealManage, an association management firm that oversees properties in Arizona, California, Colorado, Florida, Louisiana, Nevada, and Texas. “They might include posting requirements as well. In some states, you need to post the agenda four days ahead of time. In others, it’s less in advance than that, but you still have to have the agenda posted; emailing it to owners isn’t sufficient. That’s difficult for some associations that don’t have a place to post things.

“A lot of states have adopted the open–meeting philosophy that county and city governments have,” adds McPherson. “So boards may be required to have a homeowner forum, and many boards forget about that. Or they’ll have it at the wrong time. Some states specify that it must be at the beginning or the end of the meeting.”

That’s just a taste of the traps some boards fall into. Read about four more snafus to sidestep in our new article, Avoid These Six Common Annual Meeting Mistakes. 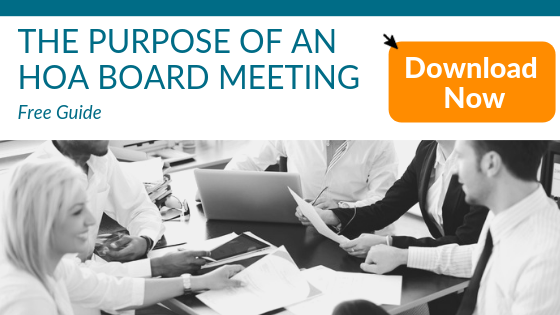